The Bluff Shelter at Blue Spring

For thousands of years, American Indian elders have told stories of visits to Blue Spring and the important ceremonies held in the bluff shelter that served not only as a refuge, but also a sacred place for ritual.

In 1971, Robert G. Chenall and his students from the University of Arkansas conducted an archeological dig of the small bluff shelter next to Blue Spring. They found prehistoric artifacts, shellfish and the bones of deer, turtle, and other fauna. Some date back as far as 8000 BC. Chenall also uncovered fire pits, and evidence of life such as small arrow points and Woodward Plain pottery, confirming the presence of American Indians dating back as far as 1700 AD.

The Bluff Shelter at Blue Spring is listed on the National Register of Historic Places. 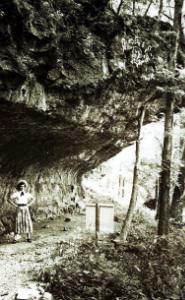 The tour is handicap accessible